A paedophile, a murderer, an epileptic madman and the prophet of a major religion walk into a bar.

Did you laugh, did you even smile? Then you’re marked for death, as I am for writing it, as anyone could be for drawing a stick figure and writing Mohammed beside it.

Cartoonists have been gunned down for standing up against the increasing censorship in our society. This makes me feel terrible and pathetic because I recently backed out of one the other important fights about free expression that are going on simply because I was told to by my friends. While others are standing up and being shot, taking on Islam’s hatred and arrogance, I am sitting down and stepping back from fighting the far less violent forces of ‘social justice’.

In the face of what we’re seeing now, that seems like it was a mistake, however good the reasons for doing so.

Still, it’s clear that even in the face of an atrocity like this, people are still unwilling to admit there are problems. Problems with censorship, problems with religion, problems with Islam in particular.

Here is an unreformed, barbaric religion whose followers, globally, support – in the majority – stonings, Sharia Law, the death penalty for ‘disrespecting the prophet’. Even in the UK alone, with its relatively progressive Muslim population, 40% are in favour of imposing Sharia Law, 20% had sympathy with the 7/7 bombers and some 78% thought mocking the prophet deserved prison with 12% agreeing that it should be punished with the death penalty.

Even today it is virtually impossible to get even moderate Muslims to condemn the killings. They simply, at best, stay silent.

Islamic sensitivity is far from our only issue though and perhaps those incapable of or unwilling to examine their own censorious issues and hypersensitivity are excusing Islam for more personal reasons. We’re not so immune to this creeping madness. One need only look to the Twitter Joke Trial, the recent arrest of the gentleman who made an off-colour joke about the Glasgow Truck Accident or Criado-Perez’ prosecution of her (predictably pathetic) trolls for ‘threats’ that were obviously spurious. One could also look to Gamergate and gasp at the sheer hypocrisy of those who ARE standing up for free expression against gun-toting Islamists but who didn’t dare to raise a peep against other – less violent – forms of censorship.

While they may not be shooting anyone, yet, is there really any difference between the claims that insult amounts to ‘real harm’ from the religious:

Muslims love the Messenger Muhammad (saw) more than their parents, children and even themselves! Why don’t people understand? #ParisShooting

Because it is, and I pick my words carefully here Mr Choudary, ‘fucking insane’. You’ll note, also, how he uses the ways in which we have already chipped away at the edifice of free expression in his arguments:

If freedom of expression can be sacrificed for criminalising incitement & hatred, Why not for insulting the Prophet of Allah? #ParisShooting

The answer is not to ban or prohibit Islam, or indeed any other form of expression, no matter who thinks it is hateful or dangerous (unless it can be show that it actually is). The answer is virtually always ‘more speech’.

Anything and everything must be open to mockery and it is these same, vital, Enlightenment principles of free expression, satire and free society that also make us free to protest and expose the actions of our governments, which are sometimes blamed as being the ‘true reason’ behind these barbaric attacks upon artists, writers, comedians, film-makers and others. 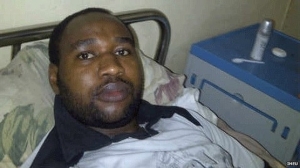 While atheists have plenty of issues all around the world, at least we don’t have to deal with this sort of problem any more.

In Nigeria, Mubarak Bala has been beaten, threatened, drugged and confined to a mental institution simply for being an atheist.

He lives in Kano in Nigeria‘s predominantly Muslim north. The state adopted sharia law in 2000 and has a strict Islamic police force called the Hisbah.

You can read a full run down of the issues at the following links:

While Change.org is essentially a meaningless online petition site, you can sign HERE.

You can email the Nigerian Ministry of Justice directly HERE.

International pressure and human rights pressure CAN make a difference here. Nigeria is an up-and-coming economic and social power in Africa and wants to be seen as a modern state. Mubarak’s situation runs counter to those wishes and so they should be vulnerable to pressure from groups like Amnesty. As a member of the Commonwealth they may also be susceptible to pressure from the British government. You can email the UK Foreign Office HERE.