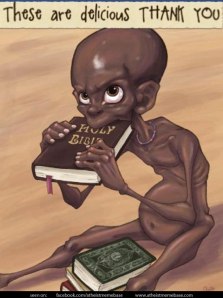 He spends a bit of time establishing his atheist credentials, the bad attitudes he’s uncovered in others by revealing he’s an atheist, getting swept up in the New Atheism and then emerging out of youth with a PHD and a brain capable (it would seem) of thinking.

Where Chris seems to have gotten knocked off the rails is in expecting the poor, the destitute, the hopeless and addicts to have come through life with a cynicism towards religion and a lack of faith similar to his own. Never mind that religiosity is strongly correlated with poverty, lack of education, lack of intelligence and other issues but a bad run in life is a piss-poor reason to be an atheist. That kind of reasoning smacks of the common accusation that an atheist must have ‘had something bad happen to them’ or that they are just ‘angry with god’. The good reason for not believing is being skeptical, using reason or not having been indoctrinated with the stupid idea in the first place.

We really shouldn’t be surprised that religion is so much more prevalent amongst the poor and the desperate. Religions heavily predate upon people in dire straits and if you’re homeless you’ll often have to sit through or profess religion in order to get a hot meal or somewhere to sleep for the night. It also offers (false) hope, which is great for keeping people in their place and preventing them getting the genuine help they need. It can also – in the case of the Abrahamic religions – feed heavily

I’m not suggesting religion is a deliberate conspiracy to keep people down, but that is what it does.

“Religion is excellent stuff for keeping common people quiet. Religion is what keeps the poor from murdering the rich.” – Attributed to Napoleon

What Chris doesn’t seem to understand, when he’s talking about how these societal victims are treated and regarded as dregs is just how much the dominant religious paradigm, especially in the United States, is an integral part of the society that judges them. They are sinners, god is judging them and treating them badly in this life and then – to add insult to injurty – they often have to turn to churches for assistance because welfare has been gutted. People who think we can rely on charities and philanthropy rather than state aid need to read Charles Dickens.

Chris’ problem seems to come in from the way these people draw comfort from their faith. Their god doesn’t judge them (irony) and it gives them hope.

Well sure, but that says nothing about whether the belief is true or rational now does it?

Further, I would argue that overall faith causes harm. It feeds into the judgement of these people in the first place. Keeps them in their place with false hope (much as it did in times of slavery). It also contributes to the reluctance of society as a whole to deal with these problems by other, more effective, means.

Is giving someone false hope a kindness? I don’t think it is, in part due to the numbing effect it has on their will to change things, in part because it simply isn’t fair to string people along like that.

Chris is handwringing unnecessarily. I suggest he read Breaking the Spell by Dan Dennett and particularly his comments on ‘belief in belief‘.

This kind of attitude, that only the wealthy and educated can get use out of atheism or are owed the truth is horribly patronising. Faith as something for the little people, like a comforting blankie for a toddler to keep them quiet. Sooner or later you have to wean a child off the tit or it becomes sinister and more about what you want than what’s best for them.